Julkaistu: 13. joulukuuta 2016 | Kirjoittanut: Gitte Østergaard Nielsen ja Cecilie Løsecke Olsen
In 1999, a new law on Danish language education came into force. In this law, the final examinations in Danish were introduced and set under national governance, and the requirements were defined. Since then the tests in Danish for adult migrants have developed and there has been an ongoing revision of both the language education and tests offered. 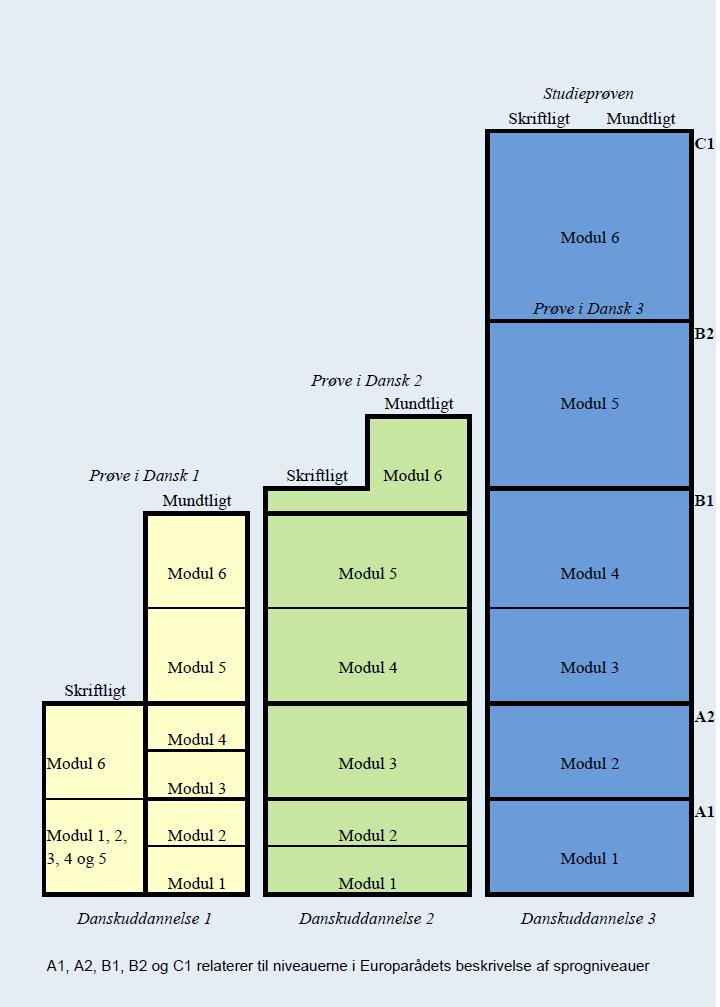 There are four centralised final exams in Denmark. They are general language tests, that is: Prøve i Dansk 1, Prøve i Dansk 2, and lastly Prøve i Dansk 3, which finalises the three educational programs’ long study program in Danish. In addition, there is a test called Studieprøven, which is one level higher than Prøve i Dansk 3 and which has the special aim of assessing if a candidate has sufficient skills in Danish to be able to study at university in Denmark.

Both the aims of the language education and the final language exams are linked to the Common European Framework for Languages (CEFR). The four tests in Danish include both a written and an oral component and have the same target to assess migrants’ language competence in relation to the different CEFR-levels:

A migrant who is at least 18 years old has the right to take the exam even if they have not participated in formal Danish language education. About 11,000 candidates took the exam in 2015, approximately a 7% increase in the amount of test takers compared with the year before.

Tests in Danish and the question of rights

Since 2003, some of the Danish tests have been connected with the attainment of certain rights, and in the past few years, the various ruling governments have differed in their opinions of which tests should be connected with which rights. Today, Prøve i Dansk 2 is connected to obtaining permanent residency in Denmark. Prøve i Dansk 3 is connected to Danish citizenship. If a person fulfils a number of other requirements, e.g. having been employed for a certain number of years, passing Prøve i Dansk 2 may be sufficient for them to obtain Danish citizenship. In addition to the language test, the person is, however, required to take tests in Danish history, culture, and society. These knowledge tests are also used in connection with obtaining the right to permanent residence.

When language tests are combined with personal rights, the quality requirements of the tests have to be very high. ALTE (Association of Language Testers in Europe) is an important structure in supporting the continuous development of language tests with the goal of attaining higher quality. In connection with this, the Nordic cooperation in ALTE Nordic is especially important for test development in Denmark.

For the moment, the focus in Denmark is on quickly employing and integrating the large number of new migrants with a view to these new arrivals becoming self-sufficient. To this end, there has been much discussion about how language education can be made more vocationally oriented so that it can, in the best possible way, support the new citizens’ real needs in navigating the Danish labour market. This also raises questions of whether the vocational focus should be even more visible in the Danish tests. Consequently, Nordic cooperation can be an important resource when trying to find new ways to organise both the language education and the language tests.

For many years, there has been a push to digitalise the tests in Danish. Currently, there are discussions about the new possibilities that digital tests and the use of an item bank would allow for. In 2016, preparatory work for digitalising the tests of Danish was started and it will be exciting to see if this work will result in a political decision to digitalise the test of Danish.