Business contacts have increasingly become international and close liaisons abroad are commonplace. The aim of the LangBuCom-project has been to investigate the use of languages and thus language needs in international business communication among the employees of Finnish companies and organizations that have contacts with German-speaking partners. The reason for this focus is that the German-speaking countries are the most important group of countries for Finnish foreign trade. The empirical data provided by the project can be used to support the choice of languages, the language policy, and the development of the language curricula.

Within the LangBuCom-project, a questionnaire survey was conducted in the autumn of 2016. The target group for the survey were employees in Finnish companies with associates in German-speaking countries. The online questionnaire consisted of 23 closed and open-ended questions and the response was 272 completed questionnaires. The answers have been analysed both quantitatively and qualitatively.

The background information about the respondents can be summarized as follows:

Franceschini (2011: 346) notes that attitudes play an important role in the acceptance and use of languages: “Attitudes are known as powerful variables that co-determine the development of multilingual language use […].” It is therefore interesting to look at the respondents’ attitudes to multilingualism, see Figure 1: 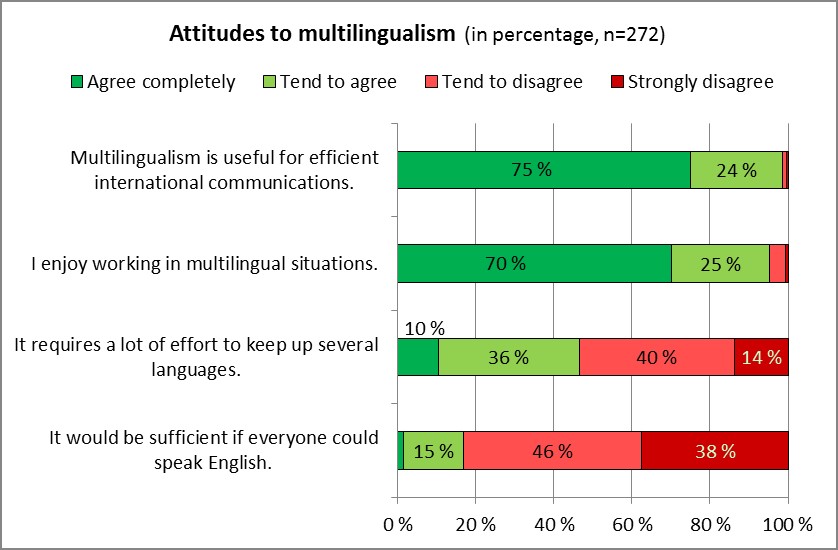 In the questionnaire, the respondents were given the following definition of multilingualism: “Multilingual situations are characterised as follows: two or more languages are used in one and the same situation, irrespective of whether you are speaking, writing, reading or listening – for example, if you are speaking in one language and at the same time reading something in another language.” Figure 1 shows that “Multilingualism is useful for efficient international communications” received the largest agreement among the respondents (99 %). Almost equally positive was “I enjoy working in multilingual situations”, where 95 % of the respondents agreed. Regarding “It requires a lot of effort to keep up several languages”, the respondents’ opinions were rather divided: 46 % of them agreed that maintenance of languages needs a lot of effort, whereas 44 % disagreed. The statement on the dominant role of English as lingua franca “It would be enough if all could speak English” was clearly rejected: 84 % of the respondents disagreed, whereas 16 % agreed. Overall, the respondents’ attitudes to multilingualism and the use of multiple languages were (very) positive and the use of a lingua franca (English) alone was not considered sufficient. This statement corresponds with opportunities which individual multilingualism entails such as the possibility of language alternation and code-switching, when words are missing, or mediation, when the interlocutor does not catch the meaning.

Languages used in the workplace

What languages do the respondents use at work and how frequently do they use them? Figure 2 provides the answer to these questions: 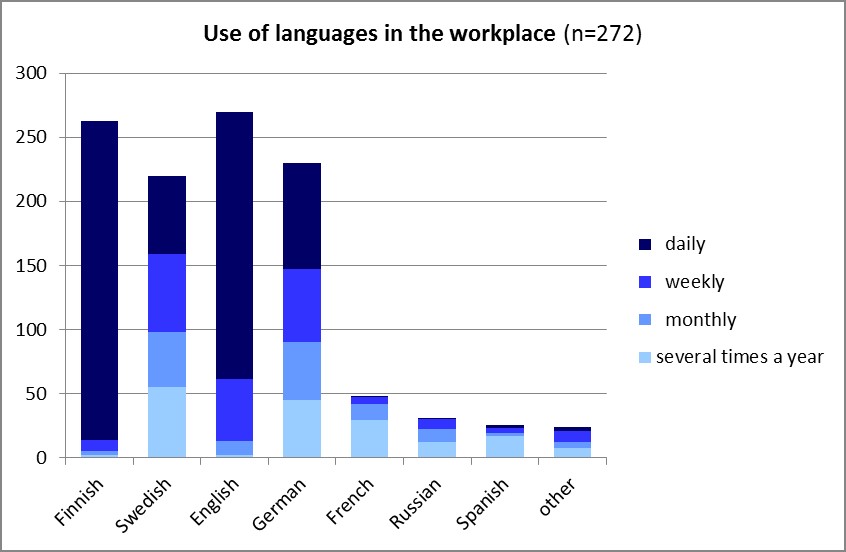 Importance of foreign languages in the work context

The survey results show that the importance of foreign languages in the working context is changing: according to the respondents, the importance of English and German has increased in recent years and they anticipate that this trend will continue in future years for both languages.

The most frequent language pairs used by the respondents were:

The most frequent combinations with three and four languages involved respectively were:

Language use and challenges in multilingual situations

The respondents were also asked to designate challenges in multilingual situations and activities/strategies for solving them. In this open-ended question, about 46 % (of 158 responding to this question) answered that multilingual situations are not difficult, partly due to explanations stressing the advantage of growing up with several languages such as the following:

About 52 % of the respondents stated that they experienced challenges and about 25 % described additionally how they coped with them. The respondents frequently named the problems with statements such as “sanat hukassa” (11–46) or more detailed:

Such challenges can be solved by plurilingual activities/strategies using another language/other languages, e.g. code-switching (see example 11–10) or mediation (11–110):

When coping with multilingual situations, several respondents apparently benefitted from their ability to use an increasing number of active languages:

The LangBuCom-project focuses on language needs and use in Finish companies that have business contacts with partners in Finland’s most important trade partner Germany and the German-speaking area. The most frequently used languages are English and German, and the importance of both languages has increased in recent years and this trend will continue in future years/over the next few years. The results once more show that the actual language needs for business contacts do not correspond to the choice of languages in school. In today’s working life, the respondents related that they experienced multilingual situations, using two or more languages in parallel, as completely normal. To communicate in multilingual situations is challenging and it helps to be familiar with communicating in multiple languages. Plurilingual activities like language alternation, code-switching, and mediation promote efficient communication.

More information on the project page LangBuCom. The resarch was financed by Vaasan Aktiasäätiö.