Language awareness (kielitietoisuus) as a key feature of the new Finnish core curriculum recognises that every teacher is a language teacher (FNBE, 2014), drawing attention to the extensive presence of language in and throughout education. Language, for example, is present in the organisation of classroom spaces and activities, mediating the relationships of learning communities, and providing a tool for thinking and learning (e.g. Vygotsky, 1978). Although the language of education is often more abstract than the language of home and everyday interaction, language is not confined to the classroom but rather fluidly connects school and home, communities and relationships, free-time and assigned activities (e.g. Clark & Lindemalm, 2011). Recognising language as a key feature of education, however, highlights the responsibility of educators to work well with language. As Bruner rather bluntly states, in education “… we seem to be more prone to acting our way into implicit thinking than we are able to think our way explicitly into acting” (Bruner, 1996: 79). It might be that educators sometimes unwittingly ignore the different language repertoires and resources of students and struggle to recognise the pedagogical value of these different linguistic tools. Lack of awareness, however, “cultivate[s] a mindlessness that, in the end, reduces our own humanity and fosters cultural division even when it is not intended” (Bruner, 1996: 79).

Existing research on the nature of language and the role of language in education provides a disparate array of lenses for viewing language awareness which can potentially be used within educational contexts. It is often challenging, however, to transform the theoretical ideas into pedagogical practice. Whereas language researchers have the privilege of considering the role and presence of language in education without the relational and temporal limitations of the classroom, teachers are required to use language, frame language, create opportunities for the use of language, and teach language with multiple participants within a given timeframe working towards predefined goals. The demands of working in education and the profound influence educators can have on children’s sense of self suggest that it is all the more important to carefully consider what belongs to a language aware educational landscape.

The aim of this article is to conceptually map six considerations contributing to language awareness. These considerations include: power, structure, conceptual representation, creative potential, belonging and values. Each consideration provides an entry point to explore the way in which language contributes to the educational landscape. Placing these perspectives side by side, it is possible to trace or anticipate the trajectory of pedagogical agendas and to critically reconsider the implications of different conceptualisations. 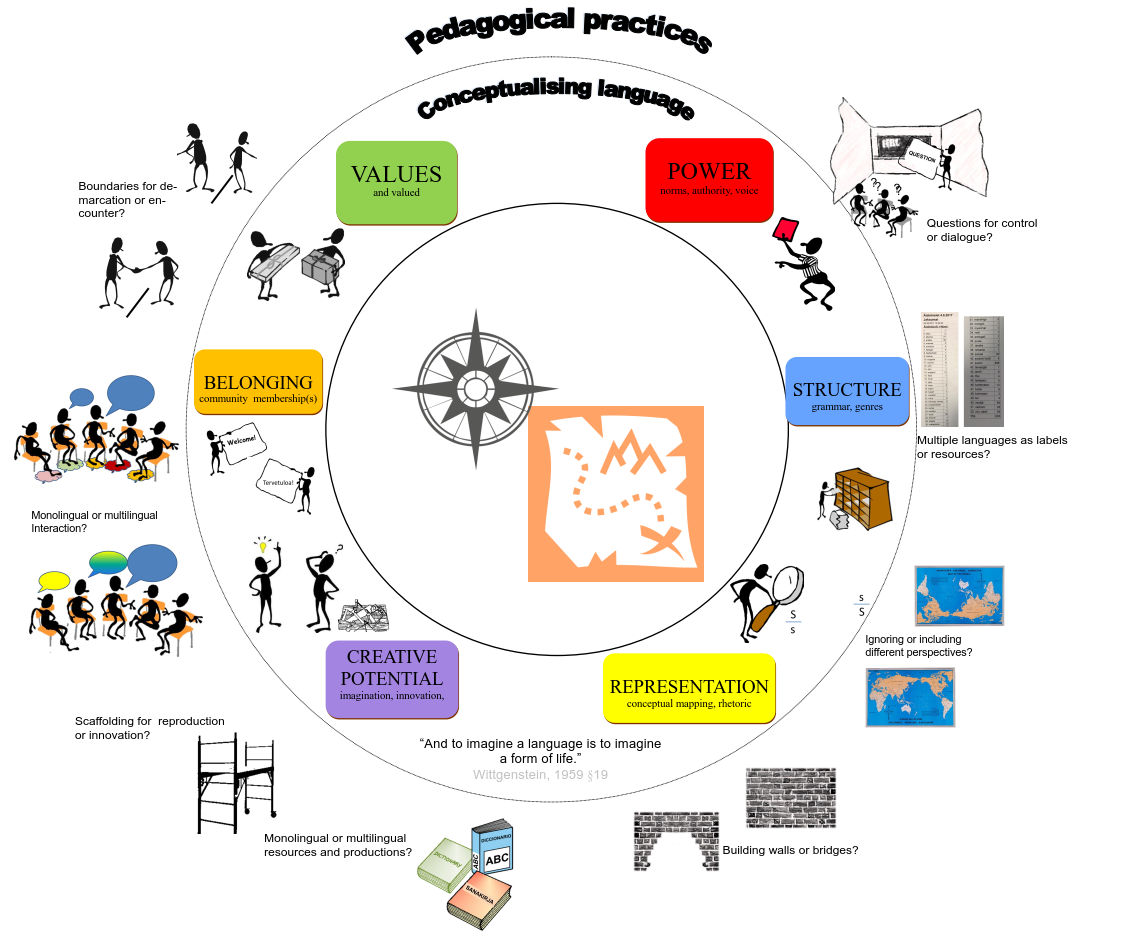 1. Language as power. The experience of those who have a voice is significantly different from those who are silent or silenced. The conventional picture of education gives teachers voice and silences learners. As students are socialised into educated ways of being, doing, relating and saying, so they are considered to be successful learners. Those that resist or reject these educated ways of using languages are too easily considered problematic (e.g. Skinnari, 2014). Acknowledging the value of using language(s) in different ways, however, can create a much richer learning environment and significantly contribute to children’s language development (Gallas, 1994).

One simple example from the classroom is the use of questions; whether questions are used to control discussions in line with a predetermined target or to initiate dialogue genuinely interested in pupil perspectives. It is also worth considering who is allowed to ask questions and what kind of questions are considered acceptable. Whilst younger children often freely ask questions to learn more, older students become increasingly hesitant to display a lack of understanding in effect limiting their potential to learn and develop.

2. Language as structure recognises that language is often framed as something given, impersonal and non-cultural, yet language is not only in minds but is also embodied (e.g. Bucholtz & Hall, 2016) and deeply personal. As Vygotsky (1978) observed, even writing is not a system-based phenomenon, but arises from bodily gestures that are personal and individually expressive. From this perspective, the often-claimed boundaries between written and spoken language seem to blur and the need to provide students with various opportunities to participate through language(s) is emphasized.

Studies of educational linguistic landscapes (e.g. Laihonen & Szabó, 2018) argue that the materialisation of languages in schools shape conceptualisations of students and teachers. Grammar chart posters, for example, visualise language as set rules. Relationships between different languages are also materialised reflecting different conceptualisations. As school populations in Finland become more diverse, for example, lists of students' first languages are displayed in school contexts (see Fig. 1). Whilst lists can acknowledge linguistic resources of students and school communities, they can also label and alienate students by assigning them as speakers of other (‘muu’) languages reducing rather than acknowledging diversity.

3. Languages provide different conceptual representations that become lenses for viewing and making sense of the world. This applies to scientific phenomena, whether the sun rises and sets or orbits and rotates, as well as to the agency of individuals and communities. In other words, what and whom we consider when talking influences the ways in which we negotiate the diversity of language use (e.g. Jaworski et al. 2004). For example, elements of language can be presented without an active subject (e.g. the verb X stands with preposition Y) or as something that people do and use (e.g. verb X is commonly used together with preposition Y). In the second example, the authority of language is reduced, whilst the responsibility and choice of language users increases.

Pedagogical practices can ignore or include different perspectives. As Finnish students’ language repertoires increase, so the range of perceptions and conceptualisations increases (see Moate, 2016). For these resources to become part of educational communities, teachers need to create appropriate conditions ‒ classrooms that foster curiosity and the space to share different conceptualisations. Scientific explanations are part of this enlarged space for engagement and important to learn, yet different conceptualisations and ways of expressing understanding are of value (Barwell, 2016).

4. In addition to being a map of existing understanding, language is also imbued with creative potential. As languages are learnt in and through social relationships, children do not merely imitate language use, they also improvise with the language(s) they hear around them. Ears, minds and tongues become acculturated but language also provides the means for novel contributions, personal intonations, collaborative endeavours and new insights.

As with other aspects of education, creativity can be scaffolded, yet this scaffolding can be designed to support the reproduction of existing knowledge or innovation. To support innovation in education, Burnard (2012) suggests reconsidering: (i) mediating modalities, (ii) practice principles (the organization and purpose of work), and (iii) forms of authorship in the creative process. These three points promote the use of new modalities and platforms (digital and analogous alike), transform organizational structures and innovative co-authorship relationships, such as students working with out-of-school actors on assignments. This kind of pedagogical innovation promotes creative language use at institutional levels as well as for individuals.

5. Although national languages are often considered building stones of national identities, the use of other languages in mainstream school systems are often limited. While elite multilingualism is fostered, languages of local minority groups are often overlooked (see Pyykkö, 2017). Although little research explores belonging in education through language to date (but see Lehtonen & Räty, this issue), language is recognised as a key part of identity and identity building connecting communities across time and space.

From a pedagogical perspective, however, everyday activities can be reconsidered through a language aware lens. It might be conventionally assumed that classroom interaction should exclusively use the dominant language of a community to promote language learning. Research suggests, however, that opportunities to use home and heritage languages in classroom activities can be highly valued by students and facilitate both content and language learning (e.g. Cummins, 2007). Teachers do not need to master all languages spoken in the classroom, but they need to be sensitive to the classroom culture guiding language use and create space for other participants to contribute their language resources (cf. Lehtonen & Räty, this issue).

6. Values are an inherent part of language use as it is hopefully clear from the different entry points outlined in this contribution. Power relations, views on language structures, representations and metalanguage, creativity and belonging highlight the value of language in different ways as well as the values purposed through the use of language in educational contexts. A key value that we hope to address, however, is the value of diversity.

It is perhaps inevitable that linguistic difference is thematised and categorised; people as well as languages and their varieties are grouped in everyday school practices. The boundary lines that we create, however, can either demarcate division or encounter. The pedagogical question is whether we establish categories to label and alienate ‘others’ and separate ‘them’ from ‘us’ or recognize difference as a meeting place that enriches understanding. Arguably value is something assigned, rather as boundary lines are drawn on a map. The question facing the educational community in Finland, however, is whether the linguistic differences now recognised within the educational system can be viewed and used as assets and resources.

It is our hope that by mapping a language aware educational landscape, this article positively contributes to the ongoing discussion. Moreover, by regarding language awareness as a complex, contextualised phenomenon we as a community can expand the complexity of scholarly work and contribute to pedagogical innovation.

Josephine Moate, Ph.D. is a Senior Lecturer in the Department of Teacher Education, University of Jyväskylä.

Tamás Péter Szabó, Ph.D. is a University Teacher in the Department of Teacher Education, University of Jyväskylä.

The authors are co-ordinating the development of a new study programme LAMP – Language Aware Multilingual Pedagogy / KiMo – Kielitietoisuutta ja monikielisyyttä tukeva pedagogiikka, a project shared between the Department of Teacher Education, the Department of Education and the Department of Language and Communication Studies at the University of Jyväskylä. The programme begins in the Autumn term of the academic year 2018/2019.

Moate, J. (2016). What is the value of plurilingualism? Kieli, koulutus ja yhteiskunta, 7(5). Retrieved from https://www.kieliverkosto.fi/fi/article/what-is-the-value-of-plurilingualism.